The Deputy Director of the Fuel Cell Nanomaterials Center, Professor Shigehito Deki, received the Achievement Award from the Electrochemical Society of Japan for his long term achievement in the field of electrochemistry.
Professor Deki’s statement follows:
Here is a bit of information about the Electrochemical Society of Japan Achievement Award, which I recently received. It can be awarded to a past Society Vice-President that has made contributions to the Society, after reaching age 65, or to someone such as a past Editor-in Chief of a Society journal, after reaching age 65, or to a past regional Society Branch Director, after reaching age 70. In the Electrochemical Society of Japan, I held posts such as the Director of the Kansai branch, the Chairperson of the Molten Salt Committee, an organizer of the Annual Society Conference, and the Society Vice-President. I served with the help of many other members, which was a true gift of cooperation. Very unfortunately, Japan suffered a major earthquake, and consequently, the spring meeting was cancelled, as well as the award ceremony. 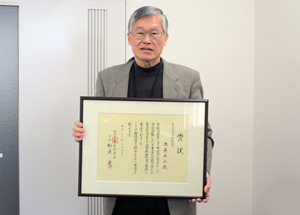