Professor Kenji Miyatake received the 3rd prize of the German Innovation Award “Gottfried Wagener Prize 2013”. This Award was launched by ten global German companies with research activities in Japan and the German Chamber of Commerce and Industry in Japan in order to support young researchers in Japan, and to promote industry-academia cooperation between Germany and Japan. It is coordinated by the German Research and Innovation Forum Tokyo.
He received the Award for his ground-breaking research that was driven by the power of imagination and innovation and provided creative applicable solutions in the field of fuel cells.
The award ceremony was held at the Residence of the German Ambassador in Tokyo on June 18th, 2013. 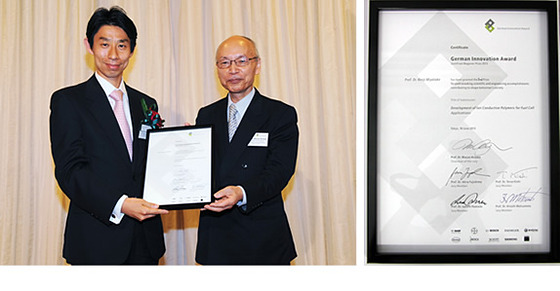