On Saturday, January 30, 2010, Prime Minister Yukio Hatoyama visited the Center with Environment Minister Sakihito Ozawa and Vice Minister for Ministry of Education, Culture, Sports, Science and Technology Hitoshi Goto. Their visit was to see the research facilities and to exchange opinions with the university students in Yamanashi Prefecture.

Center Director Masahiro Watanabe showed them around the new building and explained the latest research on fuel cells. The Prime Minister was interested in the Center Director’s explanation and expressed his high expectations for the fuel cell, which can help to solve the problem of global warming. “The Fuel cell is a promicing energy device. It might take some time to put it in practical use because of the issues of cost and durability, but I believe that Japan’s high standard of research and development can solve these issues in the near future.”

At the exchange of opinions with university students in Yamanashi Prefecture, the Prime Minister encouraged a graduate student of the Center who works on fuel-cell research, saying, “I’d like you to contribute to the 25 percent reduction of greenhouse gas emissions.” 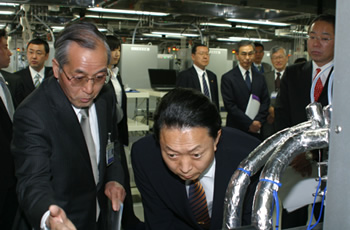